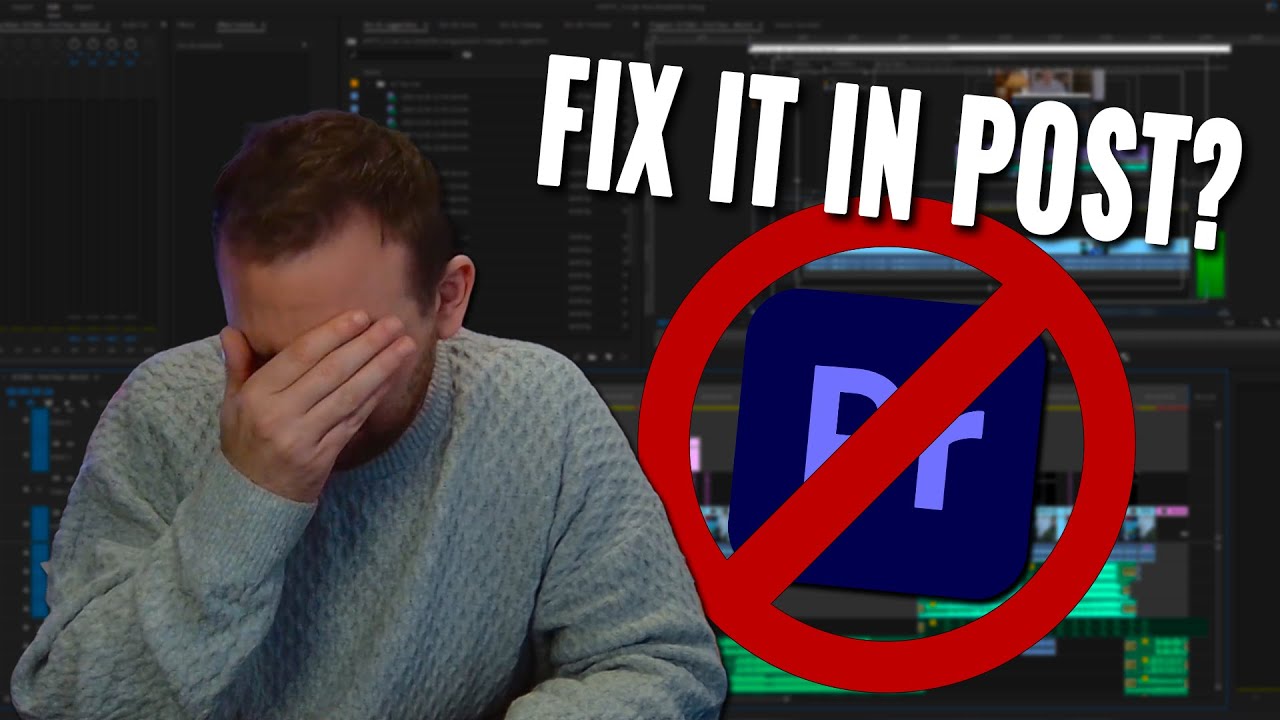 Some things you just cant fix in post production… The often meme'd "Fix it in post" can be the bane of an editor's existence. In this video, we talk about four things you absolutely should NOT be trying to fix in post.

As an editor your job, at least in theory is finding the best takes and options, then building and defining the structure and pacing of the video and its narrative whether its a short film, documentary interviews or a corporate or commercial. You’ll also need to deal with changing needs or goals and of course trouble shooting are all a necessary part of the job and require you to think creatively, flexibly. You’re going to have to learn to collaborate and yes, sometimes, fix things.

But those five words… should be setting off alarm bells.

Probably the most common fix you’ll be asked to pull out of your hat, especially for Youtubers, low budget productions or as an internal video creator

Audio is SO important in filmmaking. It can instantly set the tone, separate the high-quality video from the trash, and bad audio will have people clicking off your video faster than anything else. So when you’re handed noisy audio, with a mic being blasted by wind noise or with the gain set way too high so that every other syllable clips you’re going to be in a bad spot. Quiet audio can probably be boosted, a little background noise isolated and removed with the right plugins… but even moderate noise can leave your dialogue sounding tinny, robotic or just “off”

If you’re the one shooting, take the time to test your levels, monitor your audio and check you’re getting good audio on set. If you’re just editing, be sure to flag the audio and set realistic expectations on what you can do as soon as you notice there’s a problem. If youre in a pinch iZotope have some well regarded plug ins you may be able to throw at the problem.

But your results may vary. Bottomline bad audio is going to leave any editor with a mountain to climb.

Bad exposure and soft focus are next to impossible to fix. Especially for the average editor. Now, exposure you get a little bit more leeway with but that is not me telling you its going to be easy. Slightly under or over exposed footage can be pulled up or back with basic colour adjustments, even in Premiere, bring that footage to grade in something like Resolve and you may well be unable to tell the footage was ever shot a little hot at all.

However, blow out a white wall, a window or light hitting skin and you’re going to find it impossible to bring back the detail. Under expose shadows and dark clothing into one big black blob and you’re going to find you either create a whole lot of noise bringing the black up OR you’ll find there's just no detail there either. And since you’re likely not shooting on a RED, Arri or other high end camera where you can lean on the cameras huge dynamic range to save you… get it right on set.

Focus… well there’s pretty much no flexibility here. Throw any kind of blurry footage into an edit and try using tools to Sharpen it and you’ll quickly find how underwhelming the results are. I’ve been there, I’ve been that editor trying to fix both these things and having to explain to a client why the video looks like arse. Raise those flags with your producer or client as soon as you can and manage expectations - if its you shooting then get your shit together.

This last one is by far the most nebulous and the one with the most grey area.

When it comes to poor planning and production problems some are more avoidable than others. Certain formats require you to “write in the edit” more than others. With interviews, testimonials and certain types of documentaries you might not know what you’ll get until you get it. So a vague idea of what the video will be or a very rough script is not the end of the world, but no promises and your results may vary.

Similarly with schedules, only got 24 hours to edit, been there done that… its doable… will it be the best you’ve ever cut? Of course not, but sometimes a video needs a quick turn around… hell maybe the video is just that simple and you CAN turn it around with the use of premade or stock assets, the format is already defined and you're more or less painting by numbers.

There’s plenty of other issues, big and small that can stem from poor planning… alot of them you can fix in post but the problem is… if you spot one of these, you’re probably just scratching the surface.

An organised producer is unlikely to have planned a shoot with a solid script and shot list but forgotten to schedule adequate time in post… where there's one issue there's usually more.

Quite quickly these problems can snowball and you can find yourself with three days to pull together a five minute mini doc from 10 hours of documentary or vlog style footage with little to no guidance, no time allocated for reviews or working on colour or sound and guess what? After your first pass they’re gonna tell you it’s too long and to cut it down to two minutes even though the time they budgeted for is already over.

So… if you see these flags… run.

Good luck out there.